Drama in the courtroom – and beyond

Posted on August 13, 2014 by baibakovartprojects 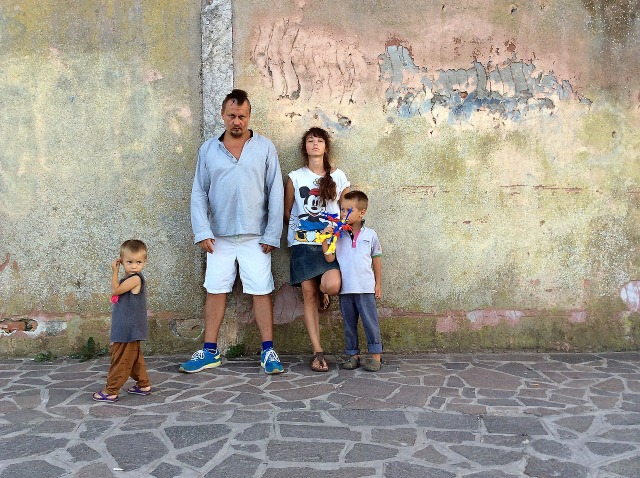 Last time we’ve heard from Oleg Vorotnikov aka Vor (“thief” in Russian), the self-proclaimed leader of Voina, an artist collective best known for drawing a 200-foot phallus on Liteinyi Bridge in front of the FSB building in St Petersburg, he was voicing his support for the annexation of Crimea. This essentially pro-Putin turn in Voina’s politics was unexpected, especially as Vorotnikov, his wife Natalya Sokol (aka Koza), and two small children, Kasper and Mama, were on the run from what they claim is a politically – motivated prosecution at home in Russia and living with no documents somewhere in Italy.

Two weeks ago, things got even weirder: Voina’s website reported that Vorotnikov had been harshly beaten in Venice, arrested by the Italian police and faces extradition to Russia. The exact order of events is unclear: Vor and Koza claim that they were attacked “with metal tubes and bricks” by 12 occupants of the Ex Ospizio squat in the Santa Marta neighborhood of Venice, where they had been living for the past two months. After receiving medical treatment (30 stitches to the head) Vorotnikov was identified as a subject of an Interpol arrest warrant and sent to jail. Unsurprisingly, the Ex Ospizio squatters’ story is completely different: according to a recent Facebook post, Vorotnikov had attacked them with an axe and later provided false information to the police on their political agenda, accusing them of dealing drugs and other unlawful activity.

Whatever the actual circumstances of this domestic drama, an extradition potentially has very real consequences for Vorotnikov: in Russia he will face trial on charges of hooliganism, insult of a representative of authority and using violence against a representative of authority. In this case “using violence” literally means tearing hats off the heads of some police officers at a political protest rally in 2011. Ironically, Vorotnikov would be much better off facing a trial for attacking someone with an axe in Italy. The classic combination of charges the artist faces back home is all too familiar by previous politically motivated cases decided in Russian courts, which means one thing: a fair trial is not to be expected. Luckily, yesterday Voina’s website reported that the Italian court has rejected the extradition request from Russia and that Vorotnikov can stay in Venice as long as he reports to the local police office twice a week (and stays out of street brawls, we’re guessing).

Russian art / legal system news do not end there: last week the Dzerjinsky court of St. Petersburg has decided that another artist and political activist, Petr Pavlensky, will not need to undergo a round of psychiatric evaluations in a mental institution following an action in support of Maidan protesters that he staged earlier this year. 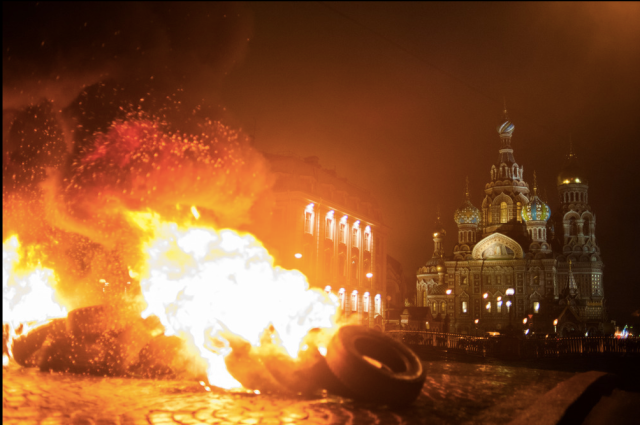 Back in February, Pavlensky and several associates constructed Maidan – style barricades made of burning tires on the Malo-Konyushennyi Bridge in St. Petersburg while shouting political slogans and waving a Ukranian flag. The whole performance, which came to be known as “Liberty”, lasted no more than 20 minutes, but Pavlensky’s resulting legal troubles have been dragging on for months. The court’s investigation into the artist’s mental health is anything but new: Pavlensky already underwent evaluation and was ruled perfectly sane less than a year ago, after his notorious “Fixation” action, during which the artist nailed his scrotum to the pavement of Red Square last winter.

If after all this you are wondering what’s going on with Russian art’s most famous political prisoners, Nadya Tolokonnikova and Maria Alyokhina of Pussy Riot, rest assured they are doing well. The Baltimore City Paper reports that they were recently seen on the set of Kevin Spacey’s hit show House of Cards. Apparently, the young women will appear in the political show’s third season, making a swift (but by now far from unexpected) turn from dramatic political performances to TV drama.