The Show Must Go On?

Posted on April 9, 2015 by baibakovartprojects

Apparently, we rushed to conclusions in our last post when we decided that the lynching of The Novosibirsk State Academy Opera and its contemporary take on Wagner’s Tannhäuser was over. After the opera’s director, Timofei Kulyabin, was found not guilty of “publicly desecrating the object of religious worship in Christianity” (the “desecration” was in the form of a poster showing Jesus Christ between the legs of a nude woman, used as a prop in the production), the theatre’s director, Boris Mezdrich, one of the most successful and influential administrators in Russia’s theatre world, was fired by The Ministry of Culture for his “unwillingness to take social values into account in his work and for disrespect for citizens’ opinions”. Mezdrich was dismissed despite massive support from Russia’s artistic community and Tannhäuser’s success amongst critics and audiences. 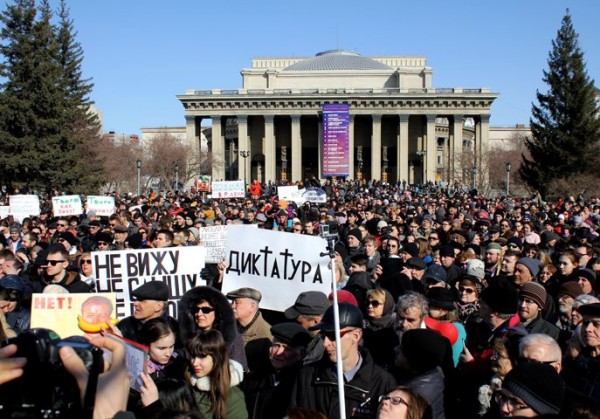 Protests in defense of Tannhäuser in Novosibirsk

After a meeting held by members of the Russian Orthodox Church and Ministry officials in Moscow, none of whom had actually seen the opera, Tannhäuser was also excluded from the theatre’s repertoire.

In a final blow, Russia’s Minister of Culture, Vladimir Medinsky, appointed Vladimir Kekhman, the director of Saint Petersburg’s Mikhailovsky Theatre, as Mezdrich’s replacement. Kekhman, who owned a major fruit-importing business before coming to Mikhailovsky, had previously stated that “as a believer, a Сhristian and a Jew” he was “insulted” by Tannhäuser. Needless to say, he hadn’t seen the production either. This absurdist turn of events has raised further concerns about the return of Soviet – style censorship and propaganda to Russia’s ultra-conservative cultural politics. In an open letter, Teodor Currentzis, the artistic director of the Perm State Theater of Opera and Ballet, has stated that the Ministry of Culture is using repressive methods and deliberately creating a split in Russian society. After the Ministry made its decision public, mass protests in support of Mazdrich, Kulyabin, Tannhäuser and freedom of expression were held in St. Petersburg and Novosibirsk. Our favorite banners seen in the protesting read “Save Culture From the Ministry of Culture”,“Hertsen and Belinsky, Not Kekhman and Medinsky!” and “We Make Kafka Jealous”.

Meanwhile in Kiev, art and politics have also collided in a major way, but with more positive results. It seems that the Kiev Biennale, which was first rescheduled to Summer 2015 and later cancelled altogether by its hosting venue, The Mystetskyi Arsenale, will live on. The Biennale’s curators, Hedwig Saxenhuber and Georg Schölhammer, have decided to carry on with the project despite lack of government support and problems with funding. Citing art’s potential for reflection and “challenging the present political context defined by the armed conflict in Ukraine”, Saxenhuber and Schölhammer have decided to frame the exhibition as a community – driven event that will unite the efforts of artists, intellectuals and activists in the face of violence. While keeping its original name, “The School of Kiev,” the event will not, however, retain the title of Second Kiev Biennale. More info on the non-biennale will be available later this month, after the curators hold an official press conference in Kiev. 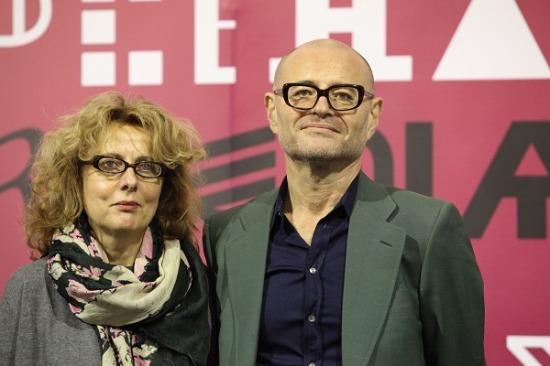 In Moscow, another art institution is feeling luckier with both space and funding: The Hermitage has officially announced that it will open an outpost in the capital in 2018. The Saint Petersburg – based museum plans to open a space devoted to contemporary art and culture in Moscow’s abandoned ZIL factory on the East of the city. The architectural project will be carried out by Hani Rashid of Asymptote and paid for by LSR Group, a real estate developer. We are personal fans of Mr. Rashid and congratulate him on the project.

Last but not least, this year Venice will also welcome a new space for Russian contemporary art. After hosting several Russia – focused exhibitions in a temporary space on Giudecca, the V-A-C Foundation plans to move to a permanent location on the Zatterre promenade during the upcoming Venice Biennale. V-A-C, an organization that has consistently supported Russian artists at home and abroad, will be the only institution representing the country in Venice besides the official Russian pavilion in the Giardini.    V-A-C director Teresa Mavika has stated that the foundation will continue to emphasize education as its key goal: two out of four floors in the Zatterre building will be given to lectures, residencies and a curatorial school. With official Russian cultural policy clearly taking a page from the Soviet playbook, progressive private initiatives like this one are more important than ever.