Art, commerce and some broken locks

Posted on September 3, 2014 by baibakovartprojects

This week Cosmoscow, Russia’s sole remaining contemporary art fair, has announced its program and list of participants. The fair, which will happen for the second time (its debut happened in December 2010 at our old home in the Red October Chocolate Factory) will take place in Moscow’s Central Manege from September 19 to 21. Led by directors Margarita Pushkina and Sandra Nedvetskaia, this edition will present 26 local and international galleries, including the London and Paris based Campoli Presti (which is bringing work by one of our favorites – Daniel Lefcourt), Milan’s Massimo de Carlo, New York’s Michael Werner and Dusseldorf’s Beck and Eggeling, which made the interesting choice of showing work by Aljoscha, an artist born in the Ukraine. Many of Moscow’s galleries and foundations world will make an appearance as well: Regina Gallery is presenting works by Russia’s blue-chip artists Pavel Pepperstein and Semyon Faibisovich, XL Gallery will show an installation by Innovation prize winner (and Baibakov Art Projects alumna) Irina Korina, while V-A-C Foundation will premiere Collecting Young Russian Art 2014, a new joint program with Antwerp’s Museum van Hedendaagse Kunst designed to support and promote young artists hailing from Russia.

While the scale of the fair is modest by international standards, the fact that it is happening at all is already an accomplishment: Art Moscow, Cosmoscow’s counterpart and Russia’s oldest art fair, was cancelled this year due to a combination of reasons ranging from politics (by now its hardly surprising that some galleries and artists could boycott a fair in Russia) to economics (the art market in the country is not exactly booming) to good old – fashioned censorship.

Following a series of misfortunes (like the recent cancellation of a Banksy retrospective) this fall is off to a promising start for Central Manege: in addition to COSMOSCOW, the venue will also hold an exhibition of Erik Bulatov, due to open on the 9th of September on the -1 floor. Bulatov, one of the most important artists of the Moscow Conceptual school, hasn’t had a major show in the homeland since the Tretyakov Gallery’s 2006 retrospective. The 81 year old artist, now based in Paris, will be showing both new work and paintings as well as book illustrations from earlier periods of his nearly 60-year career. The centerpiece of the show is “The Painting and the Audience”, the artist’s reflection on Alexander Ivanov’s “The Appearance of Christ Before the People”, a seminal work in the canon of Russian academic art. Bulatov’s large – scale canvases featuring bold slogans and symbols set against empty landscapes often question utopia, power and propaganda – a very fitting choice of show for Manege, located just steps away from the Kremlin walls. 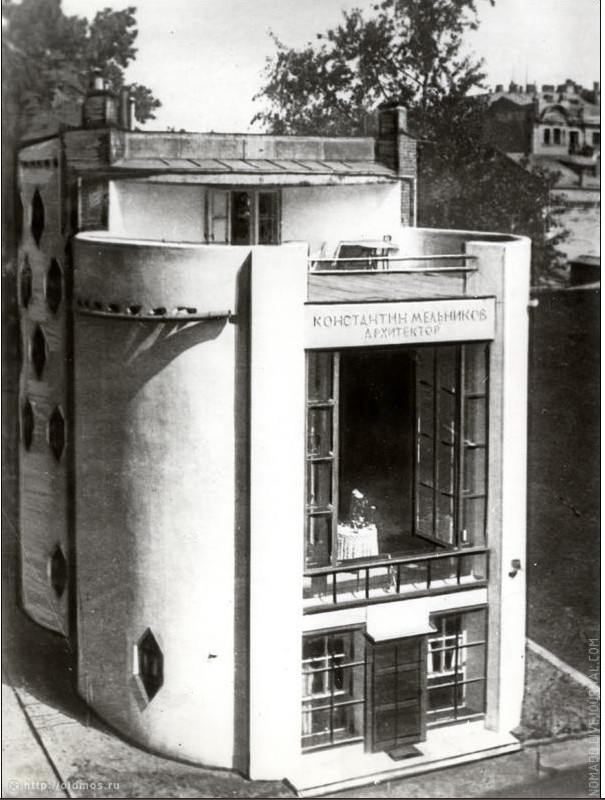 Last but not least, Moscow’s Melnikov House, one of the masterpieces of the avant – garde architect, is in the midst of another legal dispute. In recent weeks Moscow’s Shchusev Museum of Architecture attempted to take over the building in Krivoarbatsky Lane in order to begin the process of turning it into a public museum. Apparently, this process was halted by the fact that the building is the home of the architect’s granddaughter Ekaterina Karinskaya, who has been living there since 2006 and legally owns 1/8 of the property and has been the monumnet’s unofficial caretaker. It seems that the house was recently broken into by museum representatives while Karinskaya was away, locks changed and historical doorframe ruined. Karinskaya has since been able to make her way into the building, and is now barricaded inside, refusing to leave before her demands regarding to the restoration are met by museum officials.

The house, built in 1929 and considered a masterpiece of constructivist architecture, is in poor condition and desperate need of repair, both inside and out. For now, it seems the process of restoring the building and cataloguing its furnishing for the future museum is put on hold. While the idea of opening the Melnikov house to the public is something we could only dream of, Karinskaya’s insistence on having it happen on her terms is perfectly understandable – the Moscow government is not exactly known for cherishing its architecture, as the recent destruction of the Proshin house on Tverskaya has demonstrated once again.