Artefacts and Perpetual Battles: Nominees are announced for the Prix Marcel Duchamp 2013

Posted on February 19, 2013 by baibakovartprojects

Following yesterday’s announcement of the shortlist for Russia’s state Innovation prize, Baibakov Art Projects found plenty more to celebrate with the list of nominees for this year’s Le Prix Marcel Duchamp, the prestigious title awarded to a selected French (or French-based) artist each year by the ADIAF. The prize is announced during FIAC in October, and grants the artist a year to develop a personal presentation at Centre Pompidou. The award was initiated in 2000-2001, when the top honor went to none other than Thomas Hirschhorn, who – as some of our readers remember – commanded the White Hall of Baibakov Art Projects’ 2010 exhibition Perpetual Battles. Curated by Maria Baibakova and Kate Sutton in collaboration with Jean-Max Colard, the exhibition departed from Foucault, surveying the ways struggle serves as a necessary component of society.

Turns out that struggle also makes for some terrific art; Hirschhorn is not the only artist from that exhibition to breach the Prix Duchamp’s shortlist. Recent winners also include Saâdane Afif (2009) and Cyprien Gaillard (2010), who is currently featured in his first solo exhibition in New York, the much-feted (and rightly so!) “The Crystal World,” on view through March 18 at MoMA PS1. One of the key pieces in that show – the mesmerizing film Artefacts, 2011, shot on the modern ruins of the ancient capital of Babylon – was produced as a direct result of the prize.

Last week, nominees for Prix Marcel Duchamp 2013 were finally announced, and we were delighted (if not a bit flummoxed!) to learn that three of the four nominees – Farah Atassi, Latifa Echakhch (whose installation for “Perpetual Battles,” Fantasia, is seen in detail in our blog header!), Claire Fontaine, and Raphael Zarka – participated in Perpetual Battles.  Claire Fontaine dared visitors to trespass socially-acceptable behaviours and take a swing at the child-sized punching dummy Bully Bob at the entrance, while Echakhch and Zarka both contributed site specific works, using materials found in Moscow. Echakhch gathered stones from the nearby Moscow railway station to create her piece Stoning, while Zarka altered one of the concrete parking barriers outside the space into a Modernist-inspired sculpture that was, at the same time, a fabulous skating ramp.

We have nothing but tremendous admiration for each of these artists and wish them all the best, not only with this competition, but with all other upcoming projects.  (As again, they are making it hard for us to know who to root for!)

For more information about the Prix Marcel Duchamp and the nominees (including biographies and links to galleries), check here.

More information about the exhibition “Perpetual Battles” and the other participating artists (Adel Abdessemed, Oscar Tuazon, Joanna Hadjithomas & Khalil Joreige,  Wilfred Almendra and Ida Tursic & Wilfried Mille, among them) can be found on the Baibakov Art Projects’ website. 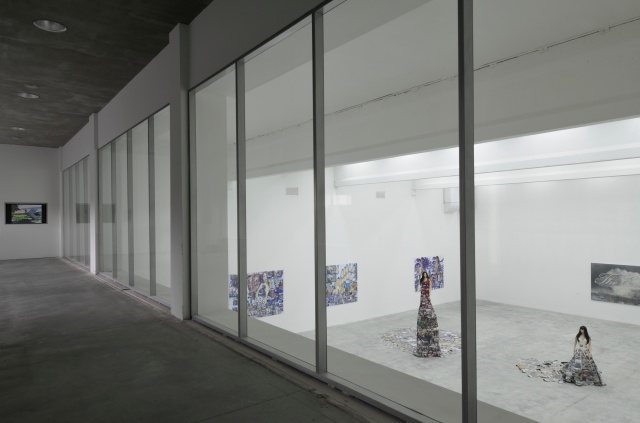 10 Responses to Artefacts and Perpetual Battles: Nominees are announced for the Prix Marcel Duchamp 2013