Posted on February 18, 2013 by baibakovartprojects 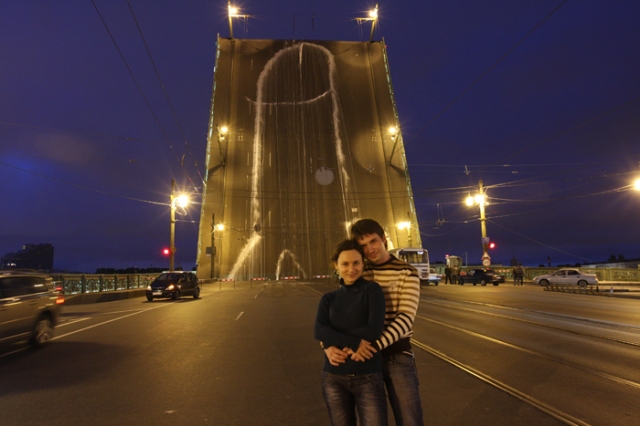 A couple pose in front of Voina’s A Dick Held Captive by the FSB, St. Petersburg, 2010

Between the National Center for Contemporary Art’s Innovation Prize and the privately-funded (by Shalva Breus’s ArtChronika Foundation) Kandinsky Prize, the Russian art world has managed to stretch the drama of the awards process – who did or did not get nominated, who made the shortlist, who stepped down, and who is boycotting the whole affair to begin with – across the calendar.

On February 15, the Kandinsky Prize officially began accepting applications for the 2013 edition. As of last year, the prize dropped one of its three official categories – Media Project of the Year – so that the remaining categories are Project of the Year and Young Artist of the Year. In its short history (since 2007), the prize has racked up quite its share of scandals, from near-riots in 2008 after the top honor went to an artist identified with Russia’s Neo-Nationalist tendencies, to just this past year, when Pussy Riot was blocked from the shortlist. (To be fair, this move echoed a similar scandal with Innovation in 2011, when Pussy Riot’s predecessors Voina were likewise dropped from the shortlist, only to be re-added, only to win Project of the Year for A Dick Held Captive by the FSB, which painted a penis on the drawbridge directly facing the former KGB Headquarters in St Petersburg.) All this aside, we were very excited to see one of our personal favorites, Dmitry Venkov, named as this year’s Young Artist.

Today, the Innovation Prize announced its shortlist for its five categories [Work of Art; Theory, Criticism or Art History; Curatorial Project; Regional Project; and the New Generation Prize]. It seems to us the nominees for Work of Art are looking more and more like New Generation, with Arseny Zhilyaev, Anya Zhelud and Promyza Group all included. As for New Generation, no surprise to see Radya or Ivan Plusch (whose red carpet to the chandelier stole the show at the Ural Biennale), but we were taken aback to see one nomination go to a list of 14 artists – including Venkov! – for something called The Barbarians.  Iara Boubnova’s “The Eye Never Sees Itself” (the main project of the Ural Biennale) may raise a few eyebrows for its place in consideration for Curatorial Project (alongside Andrey Erofeev, and artist-curators Yuri Albert and Anastasia Ryabova), rather than Regional Project – the ever-controversial catch-all for anything not happening in Moscow. The least Moscow-weighted of the categories clearly goes to Theory, Criticism or Art History, which sees two contenders from the St Petersburg’s State Russian Museum’s Department of New Trends – Alexander Borovsky and Katya Andreeva – as well as two art historians-in-self-imposed-exile Boris Groys and Victor Misiano.

Obviously, no prize ever perfectly summarizes an art scene, but we are intrigued to watch what happens when the prize is awarded in April (Oh, and to track down The Barbarians!)

We’ll keep you posted on all fronts.