Posted on October 31, 2013 by baibakovartprojects 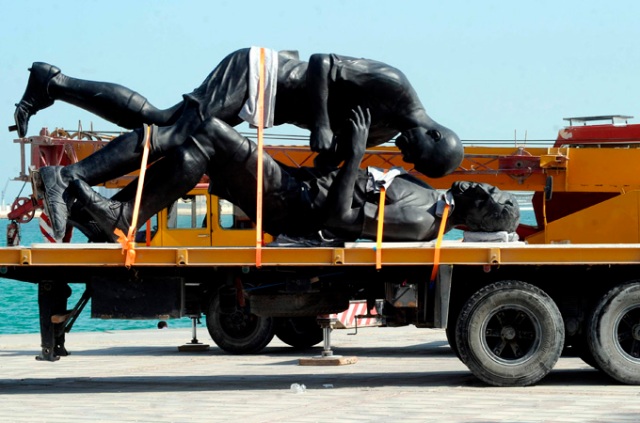 Adel Abdessemed’s Coup de tete is taken for a ride in Doha.

On October 24, Artreview launched its annual Power 100  with its annual ado. Topping a list of mega-dealers and institutional-curators-cum-Institutions-themselves was Sheikha Al-Mayassa bint Hamad bin Khalifa Al-Thani. No small wonder – the head of the Qatar Museum Authority is said to spend over $1 billion a year on art. This, for a nation of 250,000! (No small wonder that when we started to Google search for it, the saavy search engine kindly tacked on “jobs” for us.)

You can find ArtReview’s full profile on the Sheikha here, but we want to pause on one point in particular: “And while, as a result of the sheikha’s efforts, Doha may have recently hosted major exhibitions by art superstars such as Cai Guo-Qiang, Takashi Murakami and (currently) Francesco Vezzoli, there’s a limit to its importance if no one sees the shows.”

For, as impressed as we’ve been with Doha, they have a point. The recent opening of three solo shows by Damien Hirst, Adel Abdessemed and Vezzoli should have been a blockbuster, by 2006-era-art-world-reckoning. Still, local audiences were quick to offense (to be fair, they were given plenty of good material. Adel, true to form, showed a video of lighting chickens on fire. And here we thought the Usine video we showed in “Perpetual Battles” was rough.) The Gulf art community voiced the very pertinent question as to why the QMA was spending time and resources putting together the largest Hirst show on earth, rather than supporting local artists.

Last week, the The Art Newspaper reported on steps the QMA was taking to establish itself as a private entity which receives some government funding, thus distancing itself from the state. This, in the wake of claims that the QMA had so wantonly conducted itself as of late, including “granting a marriage allowance to a gay executive, hiring a yoga instructor to manage the Cultural Relations Department and frequent ‘drinking and shamelessness.’” [Read the full story here.]

Still, yoga wasn’t the only thing rubbing the state the wrong way. After having to defend an embryo’s right to a still-not-fully-developed penis for his massive – 46 feet here – anatomical sculptures, Hirst then had to go on record clarifying that the fig leaf added to another sculpture had been added for China’s benefit, and was thus not a bow to local censorship.

Hirst’s sculptures still… stand?, but today, it was announced that the QMA had yielded to requests to remove one of Abdessemed’s. The Algerian-born French artist had publicly installed Coup de tête (2011-2012), the five meter bronze sculpture of the infamous unsportsmanlike incident at the 2006 World Cup, when Zinedine Zidane headbutted Marco Materazzi. While Zidane would also prove a muse to Philippe Parreno and Douglas Gordon, Abdessemed’s take was a little too frank for Qataris, who wondered why it was there. (Let’s remember, Paris wasn’t too thrilled to have it outside the Pompidou.)  While Hirst’s anatomy lessons could pass as educational, Abdessemed’s portrayal of the human figure was found to flaunt Islamic tenets against the making of false idols.

It will be interesting to see the international response to this (though so far the story seems to be wielding popularity on sports sites.) In any case, what a week for the QMA. Maybe that “jobs” was for them?