Posted on September 12, 2013 by baibakovartprojects 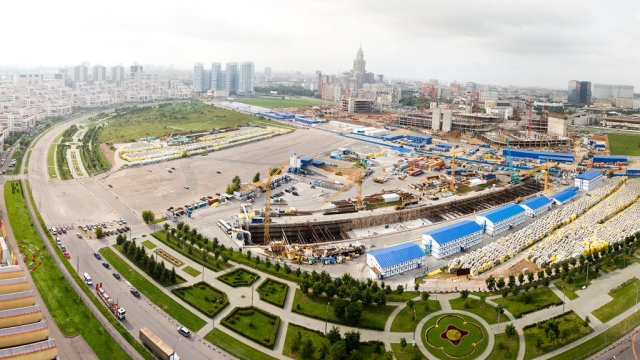 A few days ago, Sophia Kishkovsky published an article on The Art Newspaper titled “Moscow biennial curator and artists explain why we shouldn’t boycott Russia,” in which Biennale curator Catherine de Zegher compares provocative art to fast food (“It flares up, then it’s finished.”) What was most particular about this article was not the quotes, however, but its very existence. With all the focus on Manifesta and St Petersburg, what about Moscow?

The city has been in the news for its contested mayoral elections, but what about the art world? Unlike Manifesta, there have been no high-profile petitions circling the Moscow Biennale, though then again, the Biennale never announced itself as a forum for emerging or marginalized perspectives. But how is the Moscow art world responding and what is keeping them so preoccupied?

So far, we don’t know. By all appearances and despite (or maybe because of ) rumors that the head of Moscow’s department of the Ministry of Culture Sergey Kapkov might step down, the city’s art scene seems to be thriving. The opening of the season at Winzavod saw record numbers streaming in, while the art world anxiously braces for next week, which brings the Biennale, Art Moscow, and the much-anticipated opening of John Baldessari at the Garage.

In the midst of all of this, Russia’s National Center for Contemporary Art has launched NewNCCA.com, a website dedicated to an open, international tender for proposals for a new museum builing. If you remember, originally the museum was to be a shimmering tower, 17 stories over Baumanskaya, designed by none other than director of the NCCA Mikhail Mindlin. Now Mindlin will serve on the jury for the open tender, alongside Moscow’s chief architect Sergey Kuznetsov. Others invited to participate on the jury include Baibakov Art Projects’ own Maria Baibakova,  MuKHA director Bart de Baere, and Hermitage’s Mikhail Piotrovsky.

Proposals will be accepted through September 20, 2013. For more information on how to submit a proposal, check here.