Posted on February 1, 2013 by baibakovartprojects 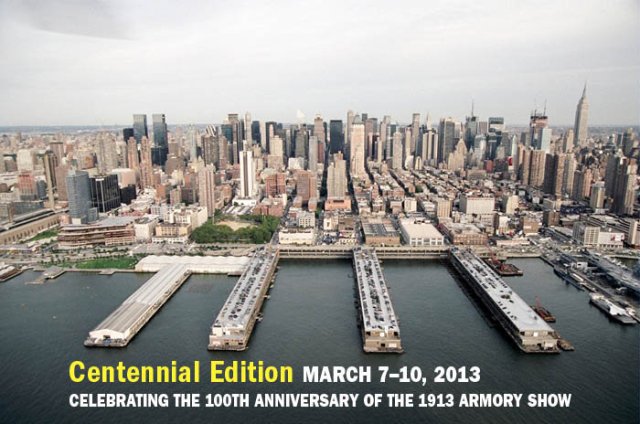 Last year, the arrival of Frieze New York seemed a certain death knell for the Armory Show and its accompanying Independent. Tables seemed to be turning in December with the announcement that Louise Blouin would be adding the fair to her holdings. Now, this week news breaks again, saying that Blouin may be backing out of the deal, after renovations to the pier proved too pricy for her taste.

While all the back and forth does not bode well for the fair, there are still some undeniable signs of life. For starters, the ebullient Liz Magic Laser is hard at work on her top secret commission for the Armory, which will this year mark the centennial of its namesake exhibition. Even more intriguingly, word got out this week that none other than Larry Gagosian – who has perhaps had a rough week, press-wise, following the publication of the New York Magazine piece, wondering if  “Gagosian is slipping?” – would be participating in the Armory for the first time ever. Even more bafflingly, Gagosian will be showing in the Focus section, which is New York-themed this year:  Yes, kids, this means that alongside solo shows of emerging artists like Desiree Holman (Jessica Silverman) and Artie Vierkant (On Stellar Rays and Higher Pictures), Gagosian will be bringing… Andy Warhol. We can’t tell if this is crazy or true genius on the part of the organizers.

Meanwhile, the Independent has been up to some tricks of its own. As its roster effectively emulates Frieze, the show has its work cut out for it when it comes to establishing its own value as a brand. One step they’re taking? The introduction of the Privatus Prize. According to a release that went out yesterday, the prize gives $10,000 to the best curated booth – be it a gallery or institution – at the fair. The judges for this award will be no less than New York staples Clarissa Dalrymple and Stefan Kalmar.

Sitting pretty among all this is the ADAA Art Show, which runs concurrently to the Armory Show from its perch at the Park Avenue Armory. Always the tonier fair, the emphasis on “modern masters” means the bells and whistles consist primarily in the stipulation that each booth be solo, two-artist or thematic. “Theme” is widely interpreted, from “Realism, Surrealism and Abstraction in 20th Century Latin American Art” at Mary-Anne Martin/Fine Art to “Artists of the 1913 Armory Show” at Debra Force Fine Art, Inc.,  to John Berggruen’s conceptually riveting: “Richard Diebenkorn, Mark di Suvero, Jim Dine, Helen Frankenthaler, Anselm Kiefer, Morris Louis, Julie Mehretu, Beatriz Milhazes, Richard Serra, Joel Shapiro, Wayne Thiebaud.” You can find the full list – along with solo projects by Louise Lawler, Jorinde Voight, Wilhelm Sasnal, and Tacita Dean  – here, at Gallerist.

So, what of Frieze New York, which opens roughly two months after the Armory/Independent? Frieze Projects curator Cecilia Alemani just released plans for this year’s program , including commissions from artists Maria Loboda, Marianne Vitale, and Andra Ursuta, as well as a recreation of Gordon Matta Clark‘s 1971 art-project-as-restaurant, Food. (And here we were excited about Roberta’s …!)