Posted on December 27, 2013 by baibakovartprojects 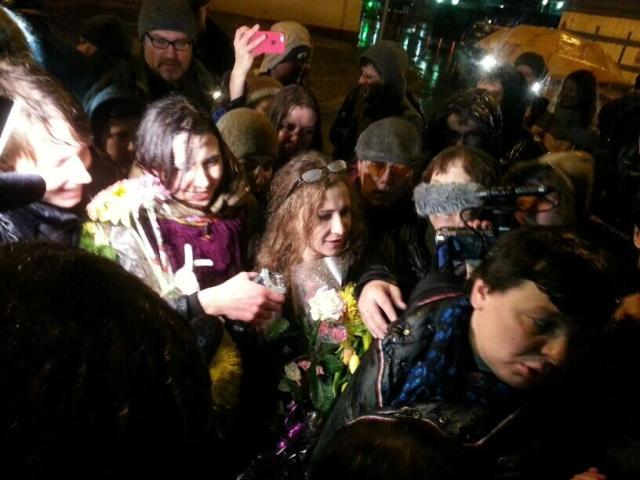 On December 23, Putin made good on the promises made by the amnesty bill passed earlier this month, and released a host of political prisoners, including team Greenpeace and Maria Alyokhina and Nadezhda Tolokonnikova, better known as members of the group Pussy Riot.

Dozdh (“Rain”) has an entire page dedicated to Pussy Riot’s post-prison activities, including today’s two-hour press conference, where the women announced the next big project for Pussy Riot. No, not another photo shoot or video, but rather an initiative that would advocate for the rights of Russia’s prisoners. Titled Zone of Rights, the organization would address the kinds of human rights violations that Tolokonnikova detailed in her letters, including forced labor (far exceeding state-mandated limits), insufficient medical treatment, and cruel and inhumane punishments, ala sleep deprivation and solitary confinement. (Again, if you’re interested, we suggest you read the letter, though we anticipate that there will be a lot more detail coming out the moment the women get some time to themselves.)

A screen shot from today’s conference, with Maria Alyokhina and Nadezhda Tolokonnikova

When questioned about funding for this organization, the pair were very clear that while they welcomed cooperation with dissidents-in-the-news, freshly-freed Mikhail Khodorkovsky, opposition leader Alexey Navalny, and Sergey Vlasov of Rosuznik, (which aids and assists those detained for political actions), all money will be coming from crowdfunding (and knowing Pussy Riot’s PR campaign, it’s safe to say we can expect the emails to start flowing in within the next hour or so…) As Tolokonnikova explained [our translation]:

We will not rely on one person in particular. If he [Khodorkovksy] considers it important to collaborate with us, then this would be a tremendous honor.  But this will be an ideological and conceptual collaboration.

We are not part of the commercial world. We’ve decided to refuse the brand “Pussy Riot” entirely. We want to build a transparent structure, our team and project will be financed by the people. As for how we spend this money, that will be decided by a group of people. As you know, we have the support of Alexey Navalny, Rosuznik’s Sergey Vlasov and Vladimir Rubashny.

Many of the questions from the press conference focused on the women’s positions on the original performance (with Alyokhina maintaining it was warranted, and Tolokonnikova voicing doubts) and also why the two women did not go immediately back to their children and families once freed, but rather rendezvoused in Krasnoyarsk, where they met with human rights advocates to put the final touches on the plans for Zone of Rights. “It would have been wrong to hide behind the children,” Tolokonnikova maintained.

There were many more quotes from the press conference, so we suggest you Russian-readers check out this page here. Otherwise, we may compile some more translations in the next few days. One thing is certain: as Tolokonnikova was clear, “We’re not going abroad. There is too much work to do in Russia.”

On  that note, on Sunday, December 29, Moscow’s Gogol Center will be hosting an event called “The System and the Individual,” which will feature a screening of Pussy Riot: A Punk Prayer, followed by a discussion with Alyokhina, Tolokonnikova, and one of the film’s directors, Mikhail Pozdorovnikin. The program will be hosted by none other than one of our personal heroes, Irina Prokhorova. Wish we could be there, but we look forward to hearing from those of you who go! 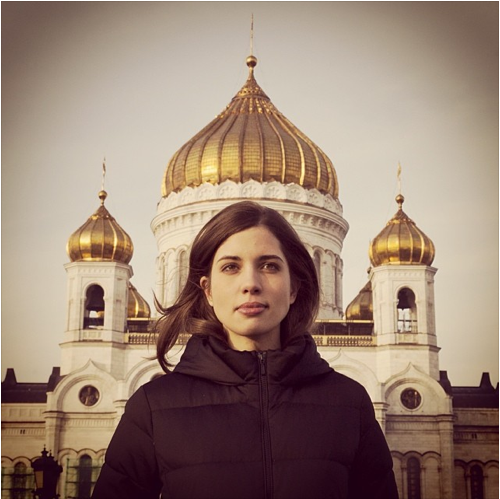 4 Responses to Black is the New Orange: Post-Prison Pussy Riot