Posted on April 16, 2013 by baibakovartprojects

On April 4, 2013, the New York Times’ reporter Alice Gregory turned in a curious piece entitled “Does Anyone Here Speak Art and Tech?” Her driving aim was to find out why there was not more social media money circulating in the artworld. The piece opens:

Chelsea is a Manhattan neighborhood long associated with warehouselike spaces filled with contemporary art, icy gallerinas who ignore all but the most well-heeled customers, and schmoozy Thursday nights, where the sidewalks of the West 20s are crowded with visitors smoking and drinking room-temperature white wine as they make their way from one show opening to another.

Just blocks away, at the origami-like IAC headquarters housing OKCupid, Vimeo and Ask.com, the nondescript East Coast office of Google at 76 Ninth Avenue and the home of Betaworks at 416 West 13th Street, are packs of newly minted millionaires, coding, developing apps and inventing the technology we all use daily (and occasionally playing foosball).

But though software engineers and art dealers may pass one another on the High Line, the worlds they inhabit could not be less alike; parallel universes that rarely intersect. And considering their net worths, technology innovators and the venture capitalists who back them are not collecting much art, according to people in both the tech and art worlds.

“If these are our next Rockefellers, Carnegies, Fricks, whatever you want to say in terms of our wealthy American elite, then why aren’t they supporting culture?” Art advisor Sima Familant is quoted asking. “If these people are the new wealthy, and they’re not supporting institutions and the arts, then we’re going to have a really big problem at some point.”

Gregory outlines ways that this is evolving, but mostly she focuses on the “Clash of Cultures,” lingering on descriptions of social media entrepreneurs feeling excluded from the intricate social workings of the art world, or leaving the Armory Show with a bad taste in their mouths. To cite the words of Jonah Peretti, one of the founders of Buzzfeed and the Huffington Post:

“It’s not like there’s some instruction manual when you show up at Barbara Gladstone that explains all this to you.” Paraphrasing typical complaints some in tech have with the gallery system, he said: “Why are they making it hard for me to buy art? I want to write a big check to this person, and they’re treating me in this way that I don’t quite understand, like they don’t really want my money.”

Rather mysteriously, Gregory does not mention any of the online platforms recently launched to bridge just these gaps, such as Artsy or Artspace, which was all over the headlines that same week for acquiring the  VIP Art (the online marketplace formerly known as the VIP Art Fair.) While Full Disclaimer, Baibakov Art Projects’ Maria Baibakova is now strategic director of Artspace, this acquisition signals that the art world is actively engaged in exploring its digital possibilities, which includes mapping out the ways one can encounter art online. In February of last year, Artforum‘s Brian Droitcour wrote a humorous account of his experience with the VIP Art Fair 2.0, including selecting his avatar (intended to allow viewers to gauge the scale of a work.) “The shadow of Ms. VIP II stretches and shrinks beneath the sun of very important art,” he concludes, after urging online platforms to go beyond just emulating existing gallery models. [Read his full report here.]

One such forum for establishing such new models is Rhizome, an affiliate of the New Museum “dedicated to the creation, presentation, preservation, and critique of emerging artistic practices that engage technology.” Founded in 1996, the platform is constantly evolving. For instance, recent projects include hosting an internet-art-of-the-month club, The Download, or partnering with Tumblr for the Internet Art Grant, a new initiative that supports innovative uses of Tumblr.) 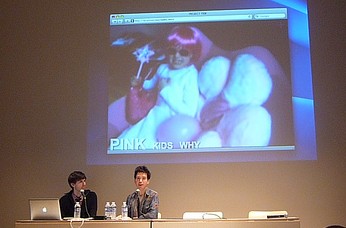 One the key highlights of Rhizome‘s programming is the Seven-on-Seven conference, which will be held for the fourth time this Saturday, April 20, 2013. The event pairs seven artists with seven “influential technologists,” creating teams of two which it then “and challenges them to develop something new—be it an application, social media, artwork, product, or whatever they imagine—over the course of a single day.”

Having admired or even worked with some of these artists before (Pfeiffer’s 2009 solo show at Baibakov Art Projects, “Perspective Machine,“ remains one of our favorites. To find out why, watch a video tour of that exhibition here), we are very excited to see what ideas come out of the conference.

For more information about Seven-on-Seven, or to purchase tickets, click here.