Posted on April 1, 2013 by baibakovartprojects 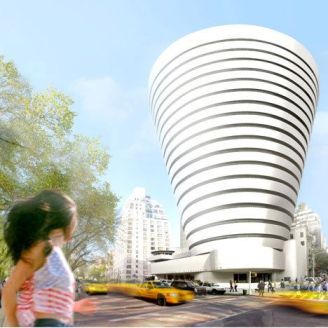 The mock-up for the Guggenheim’s April Fools’ announcement of a building expansion.

Amidst all the internet shenanigans unleashed as part of April Fools (while yes, it can get tedious wading through all the spoofs, particular props to the Guggenheim, for their announcement of an expansion to the iconic Frank Lloyd Wright building, and for Artinfo, whose daily round-up included joke news items like  “$5 Garage Sale Purchase Turns Out to Be Tino Sehgal Performance Piece Worth $3M” and “Sotheby’s Announces Full-Service Art Custodianship” ensuring that “collectors will never actually have to look at their art again”), there was one item of news that was, unfortunately, no joke.

While Russian internet has been buzzing about this the last week or so, a story in the March 31, 2013, New York Times confirmed that Russia has begun to selectively crack down on social networks including Facebook, Twitter and Youtube, as part of the child protection law that went into effect November, despite causing an uproar when it was proposed last summer.

According to this law,  Roskomnadzor (an acronym begging for its Bond movie cameo, but “short” for the Federal Service for Supervision in Telecommunications, Information Technology and Mass Communications) now has the power to block websites or providers with content deemed dangerous for children. While this applies to images of child abuse, it also can be used against websites that may promote drug use or suicide. This may seem sensible enough on paper, but if we just recall the gross abuses of the “homosexual propaganda” law, the implications are harrowing. According to Andrew Kramer’s article:

But opposition leaders have railed against the law as a crack in the doorway to broader Internet censorship. They say they worry that social networks, which have been used to arrange protests against President Vladimir V. Putin, will be stifled.

The child protection law, they say, builds a system for government officials to demand that companies selectively block individual postings, so that contentious material can be removed without resorting to a countrywide ban on, for example, Facebook or YouTube, which would reflect poorly on Russia’s image abroad and anger Internet users at home.

Kramer assures us that, “So far at least, the Russians have been mostly singling out not political content but genuinely distressing material posted by Russian-speaking users,” before also citing similar content-blocking agreements in countries including Turkey, France and Germany.

We have already heard reports of Baudelaire and Walt Whitman being yanked from bookstore shelves for promoting an unhealthy lifestyle. We’ve been cautious about perpetuating these, as it seems nothing catches fire faster than censorship stories (or so hopes Marat Guelman, who has brought his exhibition “Icons” – picketed in Krasnodar – to St Petersburg’s Tkachi Museum – but more on this later.) Still, we are keeping a watchful eye and welcome any firsthand reports from Russia.