Posted on November 7, 2012 by baibakovartprojects

With this blog, we try to stick to issues and information on arts and culture which we find important, but which may not always find an audience, due to language barriers or other obstacles in communication. We also recognize that there are far too many sources far too eager to weigh in on the American election, but indulge us, we couldn’t stay quiet after last night. 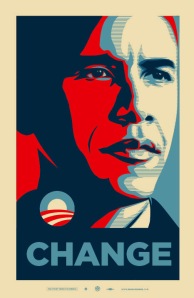 After all, how can we speak of “Future Generations” and not comment on the incredible message of hope broadcast by the American presidential election.

While Obama may have ridden in on a tide of Shepard-Fairey-inflected “Hope” for something New, his first term has been filled with some bitter disappointments, as America has struggled to pull itself out of recession. That the American people – and notably, its art community- would rally around him throughout it all is a very welcome sign that the country is committed to a little hard work to get where it needs to go: Forward. 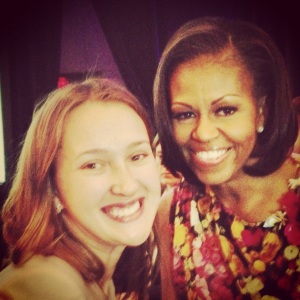 Maria Baibakova with Michelle Obama at a campaign event, 2012

While, full disclosure, we are quite dedicated supporters of Obama (Maria Baibakova even volunteered on his campaign), the POTUS’s acceptance speech last night carried a message that transcended party lines, speaking of America’s exceptionalism in terms of “responsibilities, as well as rights.” We felt this was certainly worth repeating, even in – and maybe particularly in, given Obama’s tireless advocating for the arts and education – within the context of a culture blog. You can find the full transcript here at NPR, (an entity that Obama seeks to save) or watch the video below.

This country has more wealth than any nation, but that’s not what makes us rich. We have the most powerful military in history, but that’s not what makes us strong. Our university, our culture are all the envy of the world, but that’s not what keeps the world coming to our shores. What makes America exceptional are the bonds that hold together the most diverse nation on Earth, the belief that our destiny is shared, that this country only works when we accept certain obligations to one another and to future generations, so that the freedom which so many Americans have fought for and died for come with responsibilities as well as rights, and among those are love and charity and duty and patriotism. That’s what makes America great.

Watch the full speech below:

This entry was posted in Uncategorized and tagged Obama acceptance speech. Bookmark the permalink.