Time/Food opens its doors at Stella Art Foundation in Moscow

Posted on May 14, 2012 by baibakovartprojects 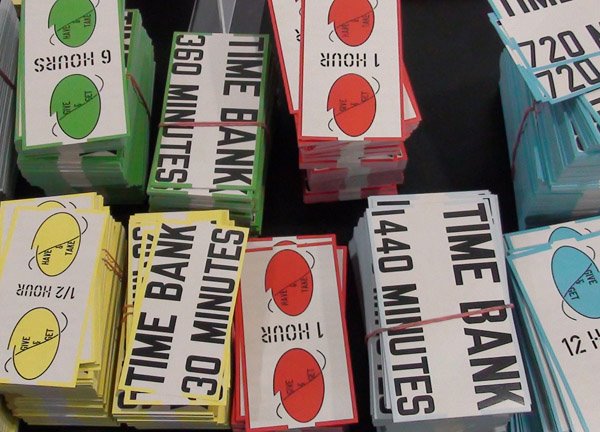 Tomorrow, May 15, Stella Art Foundation – the bastion of Moscow Conceptualism in the city – will kick off its edition of the e-flux project time/bank. The project, conceptualized by Anton Vidokle and Julieta Aranda, proposes an alternative economy, where services can be swapped for other services, based on the unit of time. The project insists that it is not a barter system, but rather “contemporary time banking”:

time/bank is a platform where groups and individuals can pool and trade time and skills, bypassing money as a measure of value. time/bank is based on the premise that everyone in the field of culture has something to contribute and that it is possible to develop and sustain an alternative economy by connecting existing needs with unacknowledged resources.

From May 15- July 15, visitors to Stella’s space on Skaryatinsky can also sample the gazpacho at time/food, a restaurant where patrons can pay for their meals with their time. One half-hour will purchase a full lunch, served from 2-4 pm Thursday through Sunday. Menus will be drawn from a collection of recipes, compiled from artists like Martha Rosler, Liam Gillick, Rirkrit Tiravanija, Paul Chan, RAQS Media Collective and Superflex. If the food weren’t enough of a draw, Openspace.ru will sponsor a program of conversations and round table discussions with speakers like Keti Chukhrov, Boris Groys as well as Rosler, Gillick, and Tiravanija.

The project will kick off tomorrow at 2pm, with a talk by Sarah Rifky at 4pm. More information will be posted here.

Stella Kesaeva, while maybe an improbable patroness for an alternative economy (as the former head cheerleader of the Oligarchettes), will also be footing the bill for time/bank’s debut at Documenta 13, opening June 9, 2012. 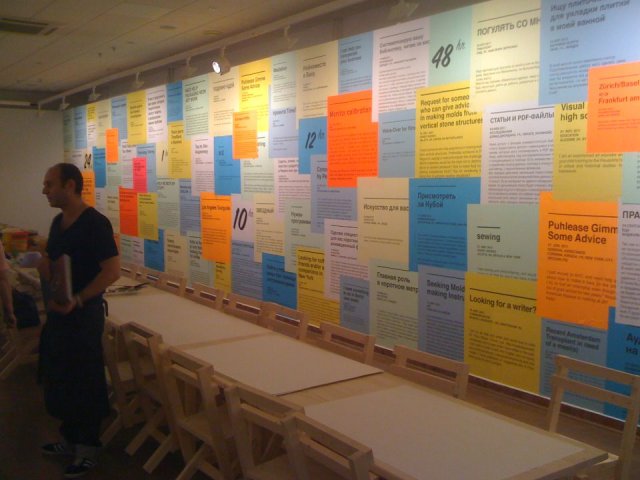 time/food at the Stella Art Foundation, image courtesy of Artchronika