Posted on January 6, 2012 by baibakovartprojects 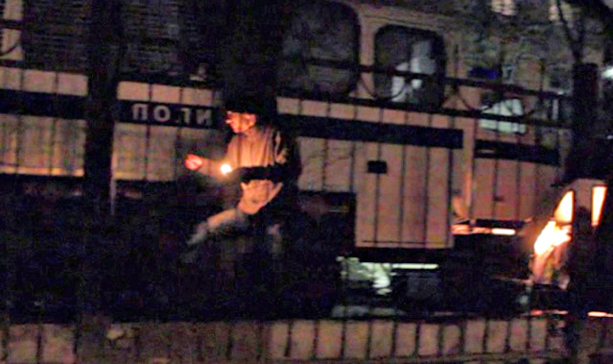 Still from footage taken by Voina

This New Years, instead of lighting sparklers, the St Petersburg-based collective Voina ensured a fresh round of newspaper coverage by lighting Molotov cocktails under a parked police transport vehicle. (You can watch the video here.) The group was quick to claim responsibility for the action, which they promoted as  “a gift to all the political prisoners in Russia.”

Needless to say, the action quickly sparked interest in news outlets across the world. It also ignited quite the debate as to whether or not this action constituted “art.” (As it was indeed presented as an art work, with the title Cops Auto-da-fé, or Fucking Prometheus.) The New York Times coverage included a quote from curator Andrey Erofeev (no stranger to scandal himself) proclaiming, “The goal of art is deeper than activism. They have carried out their assignment.”

But is the piece art? And is it even activism? Groups like Chto Delat? and Slavs and Tatars have long since served as a models of ways to address political imbalances, without resorting to Bely-esque bouts of “art terrorism.” And what implications does this type of violence take against the context of the relatively peaceful protests currently waging in Russia? Voina’s spokesperson, Aleksey Plutser-Sarno addressed these questions in an article for Artinfo, where he boldly stated that: “If an artist follows rules, canons, norms, he is dead. An artist should be walking on the razor’s edge between art and non-art, between death and life.”

The article concludes with the question of “must art be revolutionary?” A more apt question may be, when Moscow has demonstrated a peaceful, orderly attempt at a fair redistribution of power, what about this type of crude action can be truly described as “revolutionary”?

2 Responses to Voina i Mir: Collective ignites another controversy during otherwise peaceful protests